Always be ready for the worst – IT project management.

Always be ready for the worst – IT project management

Many of us have already heard about the concepts of management. Scrum, agile, speed, lean, masters, owners and project inseparable start to appear socially imagined as a part of a huge puzzle called agile management methodologies. Few positions, however, prepare us for uninteresting scenarios of working with customers, but fortunately one has emerged recently. "Eternal Delay. IT Project Management" – something for every manager and those working on projects.

There is already a plethora of textbooks and courses in the field of project management, which treat how to implement projects in a way that will ensure delivery of the desired results on time and within the planned budget.

All focus on scope, quality, cost and time, which, despite the multi-faceted nature of the assumptions, gives them a shallow focus. Why, you ask. Well, it's not about embellishing concepts with some parables and creating separate mythologies – the design world likes simplicity and works best in such solutions. Unfortunately, it is tacitly assumed that if the project is carried out in a correct manner in every respect, the customer must be satisfied and the project will continue until a happy ending, which of course has little to do with reality, for which reality has already found examples.

Exemplary design to the trash?

As practice shows, most often we deal with a situation in which delays occur both on the side of the client and the project provider. It turns out, however, that work on a project can be stopped at any time and it is very often done
at a time unexpected by the providers. This results in a work stoppage
and freezing or breaking the contract altogether. The project environment is multidimensional and complex. The project is just one piece of the puzzle of this world. The client's business is changing dynamically. The goals of today may be outdated tomorrow. Strategy changes at the company or group level. Managers change, and with them the preferences for particular suppliers. Finally, human aspects and all related relational aspects come into play.

In projects it is like in life, everything can stand on its head and surprise us in an unexpected moment. This happened, for example, in a multi-year project that even had its successes. Well, it was planned to replace more than a few dozen of IT systems with a modern platform delivered in SaaS model. The supplier was also to manage the target platform, which would consequently lead to a significant reduction in the client's IT department. After a few years a large part of the platform was working in production and was a reason for satisfaction among the customer, who could already achieve the established business objectives. Unfortunately, the company was acquired during a merger by a larger player in the market, who was no longer so kind to this design vision. This resulted in the gradual shutdown of the aforementioned platform, and consequently in stopping the project.

As you can see, regardless of the results of work to date, almost any project can be stopped by the customer for reasons dependent or independent of the supplier. This creates a huge threat to the project and suppliers, which forces a different approach to the project reality. It is important to remember that the supplier usually makes mistakes that can eventually be used against him. Therefore, the project manager should always be prepared for the worst, for breaking the contract. However, you cannot become obsessed with a bad scenario that will come true if you focus on it instead of the work. In fact, it is not about extremes, project documentation, or lack of trust in the customer. Such an approach will soon destroy any cooperation. The aim of this book is for the project management on the supplier side to be aware of the worst-case scenario at all times and to reshape their actions accordingly, even slightly; to be aware of which situations are relevant, when and how to react and how to document the facts; and ultimately to know how to defend themselves and recover from situations in which the customer threatens to break the contract or even sues the supplier.

At first glance, a scenario in which a client stops a project or breaks a contract seems unrealistic and disconnected from contractual realities.. Unfortunately, such cases are very common. This is not communicated in any loud way, as neither party would like to have a massive failure on their record, a patch of quarrelsome, or worse – ineffective. Despite appearances events then follow a repetitive scenario that worth understanding and keeping in mind. It takes place in the following way:

The aforementioned six-step scenario may take a few weeks and end in an agreement (step 5) or it may take months or years regardless of whether it ends in a settlement before the process begins, during the process, or in a court judgment. So the book gives us a different perspective, the project vendor needs to focus on a different aspect than satisfying their customer, i.e. their own and the project's security. From the vendor's point of view the goal is to run the project in such a way that you are always well prepared substantively to be able to reach a settlement (step 5), moreover to the most financially beneficial settlement. 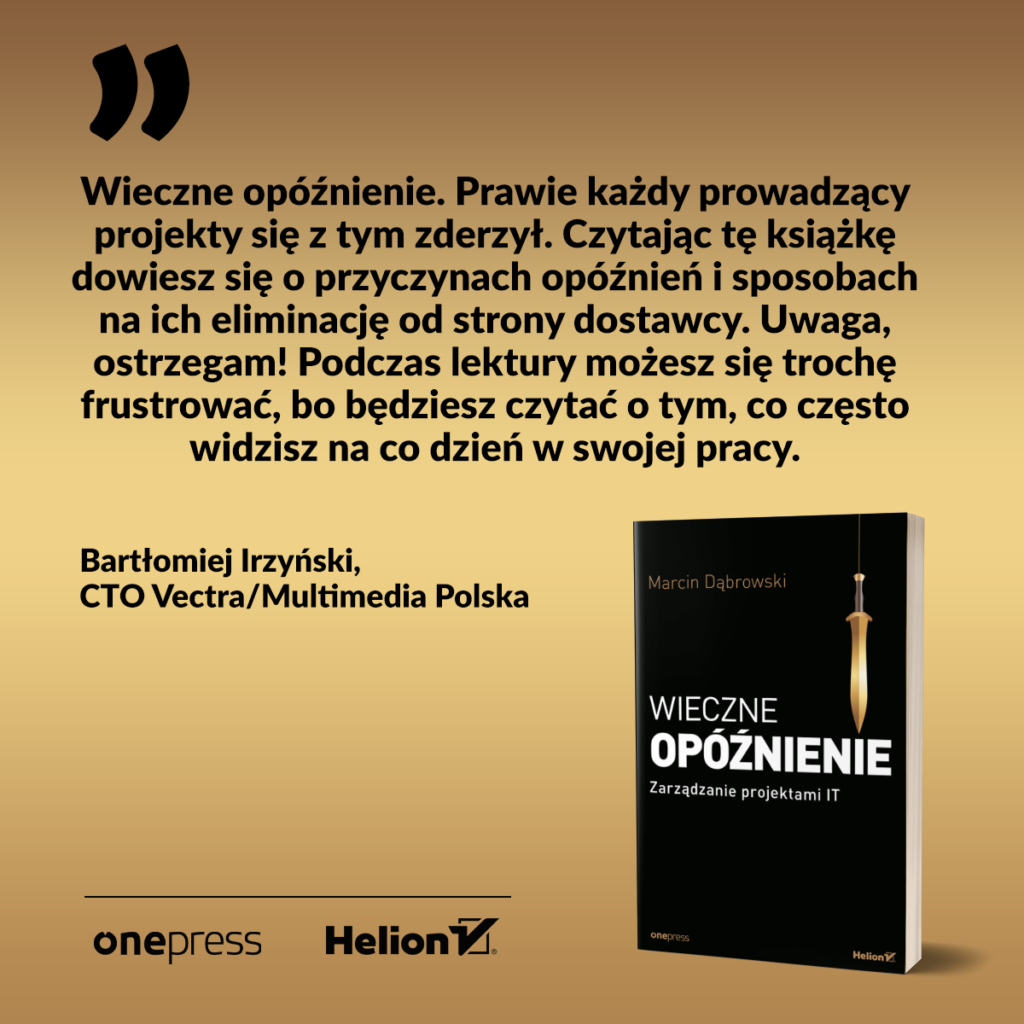 On the empik website.com dedicated to this book we can find comments from people from the industry, who decided to evaluate it for discernment against other items. Reviews are very favorable for the book, encouraging us to buy it.

„Very interesting position describing in a comprehensive way the process of implementation of IT projects, taking into account the phenomena and areas that can be described as a "gray area", including the space for differences in objectives between departments in the company, the dynamics in the relationship between the supplier and the customer, intersecting competencies within the company, etc. There are not many positions that describe these areas in such a literal way, so I think it is worth to read the author's insights.” – says Leszek Cygan, Manager, IBM.

„Reading this book, the word "honesty" kept running through my mind. It resounds in virtually every issue discussed. Honesty first and foremost – to the customer, but also to each other in the company. For me, honesty and mutual respect are very important values. I like that Marcin promotes it in his book.

It's a great, light read – written in a simple language, without pomp and jargon.

The author paints a complete picture, showing neatly and substantively both the processes that everyone knows, such as the stages of a project, as well as the unwritten rules that often determine the success or failure.

While reading, I thought many times that engineers working in projects with clients should definitely read this book. It is very practical. In me it inspires trust.” – wrote Rafał Styczeń, Founder & CEO, Ailleron | IIF.

New position in Helion's stable seems to be clearly a must for people connected with projects. After all, even the specificity of our work and its correct execution do not determine other factors as beneficial, which is worth knowing when making any project decisions.

Windows 10 the most important advantages of Microsoft’s system.

Online shopping will replace in-store shopping Not yet.

This may be a good place to introduce yourself and your site or include some credits.